AFTER being the toast of Mines and Money Hong Kong this week, it seemed only fitting that Sirius Resources took out Discovery of the Year at the event’s Asia Mining Awards last night, while Robert Friedland and Owen Hegarty were also honoured. After discovering the Nova nickel-copper deposit in Western Australia in July and taking it to a maiden resource this week, Sirius was deemed a worthy winner.

The company was up against Papua New Guinea explorers Highlands Pacific and Indochine Mining. Highlands was only five votes behind in second place.

The organisers of Mines and Money this year created the Jury's Prize for companies who did not qualify for the standard awards due to geographical location.

The panel was unanimous in awarding it to Friedland's Ivanplats, which announced three large discoveries over the past year.

Friedland was there to accept the award, describing it as "better than an indictment".

He quoted Winston Churchill in his acceptance speech, saying: "If you ever find yourself in hell, keep going."

Mining Personality of the Year went to Owen Hegarty after his G-Resources achieved production at the Martabe project in Indonesia.

Hegarty couldn't be there to accept, but said in a pre-recorded message that the award was a "wonderful surprise".

PanAust won the Project Development award for Ban Houayxai in Laos, beating out BC Iron and OceanaGold Corporation.

Deal of the Year was won by General Nice Group for its recent investment in IRC.

Other contenders were Hong Kong Exchanges and Clearings, Tronox, Glencore-Xstrata and B2Gold.

Contenders for all awards were shortlisted after a nomination process by Mines and Money delegates, after which categories opened for voting.

Six of the best receive awards 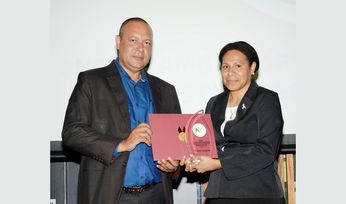