CONOCOPHILLIPS (37.5% and operator) has been granted a permit to help conduct a new 3D seismic survey in the Timor Sea over the Barossa and Caldita fields, as well as some adjacent open acreage. 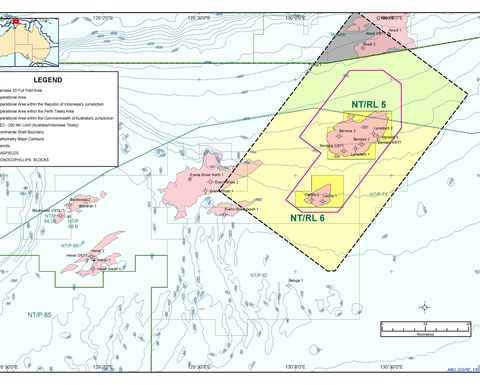 However, the US major is struggling to gain the necessary environmental approvals.

NT-08-AA was granted on Friday for areas around the two discoveries in the waters off the Northern Territory to help enable the 3186sq.km Caldita&#8208;Barossa 3D survey over two Bonaparte Basin leases RL5 and RL6.

Both Barossa and Caldita are considered frontrunner for gas to backfill the Darwin LNG plant when it runs short of supply next decade.

Initially ConocoPhillips had hoped to complete the survey by September 30, however since applying for approvals from the National Offshore Petroleum Safety and Environmental Management Authority in February it has twice been rejected and offered the opportunity to modify its plans.

It resubmitted its environmental plan for the third and likely final time on July 1, and was last week asked to provide further information.

The company has lined up the Ramform Titan to undertake the work for it and partners SK Energy (37.5%) and Santos (25%). The vessel has more recently been working in Myanmar.

The Barossa 3D survey is expected to take three months to complete.

There are two wells in the Caldita gas field and seven wells in Barossa following a recent appraisal drilling program.

ConocoPhillips operates the Bayu-Undan gas-condensate field in the Timor Sea, Darwin LNG facility in the Northern Territory and the downstream LNG facility of Australia Pacific LNG, currently in construction.

ConocoPhillips also has exploration and appraisal projects off northern Australia including the Greater Poseidon field in the Browse Basin, which is another potential source of Darwin LNG gas, and a non-operated interest in Woodside Petroleum's Greater Sunrise field which has stalled due to the political situation between Australia and Timor-Leste.

ConocoPhillips is working on extending the life of the Darwin LNG plant, with gas reserves from the Bayu-Undan field expected to be depleted by 2023.

The 3.7 million tonne per annum plant could take gas from the Caldita-Barossa or Poseidon fields in the Browse Basin - but a sticking point remains the high cost of development, even if the gas will simply backfill the existing plant.

The company is looking at a $US15 billion ($A21 billion) price tag for either option, with development of Greater Poseidon further away, requiring an Ichthys-style pipeline stretching over 900km.

Caldita-Barossa could be developed by piggy-backing off Bayu-Undan, and would require only a 250km pipeline to connect to the existing Bayu-Undan pipeline.

The final project could potentially enter front-end engineering and design in 2017.

NT-08-AA will be valid until the end of October. 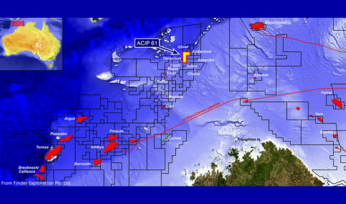 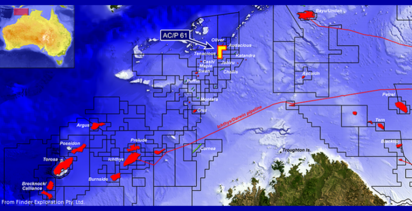