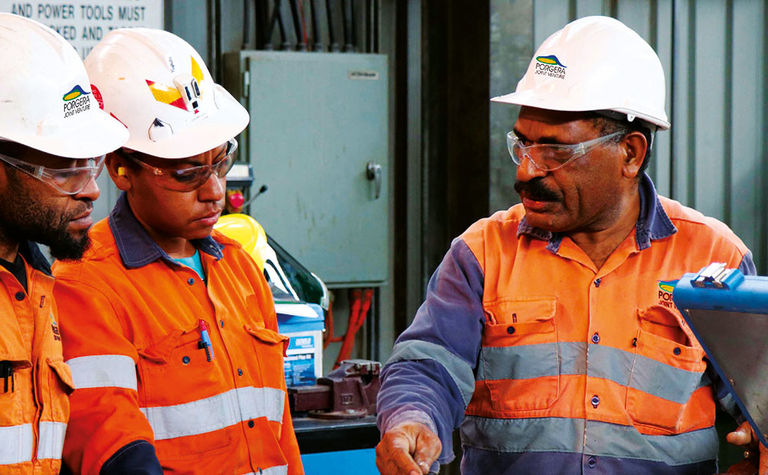 Skills development of the workforce is an ongoing program for PJV. Photos courtesy of PJV Media

Papua New Guinea's Porgera gold mine has been making a significant contribution to the local community and the country's economy for the past 27 years, representing 10% of total PNG exports.

Located in the Enga Province of Papua New Guinea, about 130 kilometres north-west of Mt Hagen and 600km north-west of the capital Port Moresby, the mine has been in production since 1990 and has contributed more than PGK3.4 billion (US$1 billion) in taxes.

Since the first gold pour more than 143 million tonnes of ore has been mined in both the open pit and underground producing more than 20 million ounces of gold.
The open pit mine is 500 metres deep and approximately 30 million tonnes of ore is excavated each year and delivered to the crusher either as direct feed or via adjacent run-of-mill (ROM) pads depending on metallurgical blending and material handling requirements. Crusher feed is based on blending the highest grades available to maximise the gold output.
Lower grade material that is not fed directly into the mill is stockpiled depending on the cut-off grade required.
Competent waste rock is disposed of in waste dumps at Anawe and Kogai while semi-competent and incompetent waste is disposed of in two erodible dumps at Anawe and Anjolek.
Electricity to the mine is supplied by the PJV Hides Power Station located in the neighbouring Hela Province while a lime plant 7km from the mine site provides lime for neutralisation and water is supplied from a reservoir at Waile Creek which contains 7 million cubic metres of water.
The Porgera Joint Venture (PJV) is jointly owned through an equal partnership between Barrick Gold Corporation of Canada (47.5%) and Zijin Mining Group Company Limited of China (47.5%) with the remaining 5% owned by Mineral Resources Enga (MRE) Ltd - a consortium consisting of the Enga Provincial Government and the Porgera Special Mine Lease (SML) landowners.
Barrick (Niugini) Limited ("BNL"), an independently managed company incorporated in Papua New Guinea, manages the Porgera Joint Venture and operates the Porgera open pit and underground gold mine on behalf of the PJV partners, producing about half a million ounces of gold a year. The current life of mine is 2028.
Since the start of production in 1990 the Porgera gold mine has paid more than PGK562 million in royalties, PGK265 million in compensation, delivered PGK224 million in the Government-owned Tax Credit Scheme, more than PGK4.9 billion to PNG businesses, and PGK1 billion to Porgeran businesses The mine employs a talented workforce of 3,300 employees, comprising local Porgerans, Engans, other PNG nationals and expatriates.
About 94 percent of the workforce are Papua New Guineans and since 1990 more than PGK136 million has been invested in skills development of national staff.
One of the cornerstones of the Porgera mine operation is the Learning and Development Framework, specifically designed to develop the skills and knowledge of the mining employees to enable the mine to stay at the forefront of technical advancement and change. 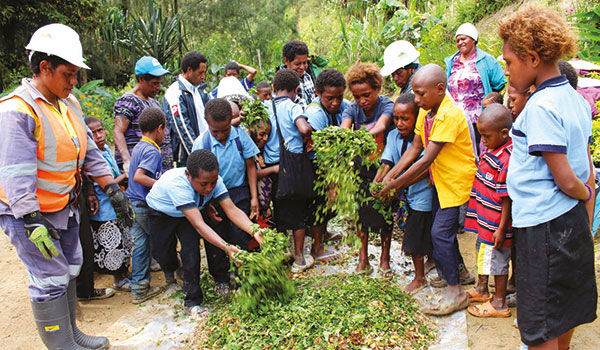 The Agri-kids project is part of PJV's Food Security Program.

PJV has trained 83 employees as trainers and assessors to enable them to attain the National Certificate Two (NC2) and NC3 qualifications, recognised by the Papua New Guinea National Training Council.

These qualifications are highly regarded in PNG and provide management with the confidence that training and assessment is benchmarked against national and international best practice for competency based training and assessment.
While operating in a socially responsible manner is critical for maintaining PJV's licence to operate a mine in PNG, the company places a great deal of importance on social responsibility and is committed to making a positive difference in the communities in which it lives and works by creating opportunities to generate greater value and foster sustainable development.
The Porgera mine site comprises the Special Mining Lease (SML) and the Leases for Mining Purposes, the mining easements (water lines routes, dams etc) as well as the public easements (airport, townships etc). The mine's footprint covers the mining areas as well as communities along the Lae-Porgera Highlands Highway, the Hides (Hela Province) to the Porgera power transmission route and the riverine tailings disposal system.
The SML was negotiated in 1989 between PJV, the seven land-owning clans, the Enga Provincial Government and the PNG Government.
PJV places a great deal of importance on Community Relations and benefits are targeted to provide the best outcome for local communities and include: more than PGK1.9 billion in operations contracts to Porgeran and Engan businesses; PGK6.5 million contribution to support the National Government's 2018 earthquake relief efforts; more than PGK43 million in donations by way of financial support and/or in-kinds, goods or services; since 2010 agriculture training has been provided for more than 3,000 farmers with more than half participating in the PJV food security program; financial literacy training (Personal Viability, Start and Improve Your Business) has been delivered to more than 265 local businesses; since 2016 permanent employment opportunities for 187 locals have been made available through a Job Ready Program; supporting and promoting local and provincial sports with an annual donation of more than PGK150,000 to Enga Mioks Rugby League Club; supporting and promoting PNG culture through a donation of PGK150,000 towards the Enga Cultural Show; as well as the Special Mining Lease Supplementary Water Project.
Community health is vitally important in PNG and PJV has provided logistic support with airlifting to conduct medivac services, medical patrols and deliver medical supplies into remote parts of the Engan community as well as working in partnership with the Enga Provincial Government to re-establish hospital services in Porgera.
The company also provides school fee assistance to under-privileged households and has donated building materials for the construction of school infrastructure to assist in providing better educational outcomes for the local region.
PJV has partnership programs with relevant government bodies such as the National Road Safety Council and District Health and international non-profit organisation such as Rotary to raise awareness on issues such as illegal mining and road safety and deliver school supplies and resources to more than 6,000 local students.
Despite many operational and social challenges; the mining operations and related activities have created opportunities and benefits for the communities.
Gender inequality is a major social, economic and political issue in Papua New Guinea and helping to move some of the barriers to women's equality demands a concentrated and targeted approach from national leaders and companies.
PJV works closely with established women groups such as the Porgera District Women's Association and Porgera Women in Business to provide commercial and income generating opportunities, business development training and pathways to empowerment. This work includes business planning and support, facilitation of service and machinery contracts with PJV and identifying opportunities for expansion outside of the Porgera Valley.
Following the earthquake in the Hela Province in February, 2018, PJV delivered five 40 foot (12 metres) containers of emergency relief supplies to the Disaster Coordinating Committee, as well as support to the Mission Aviation Fellowship to assist with delivery efforts. This was in addition to the PGK6.5 million financial support to the national government's relief efforts. 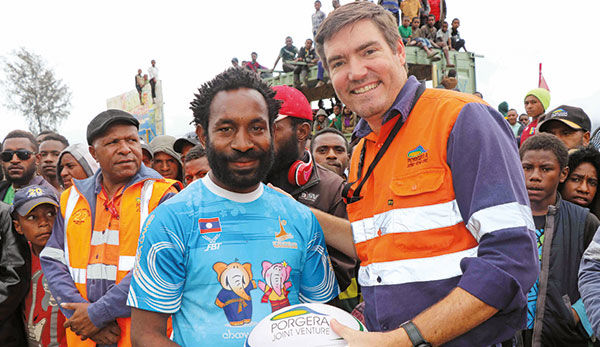 PJV continuous to support sports at the local, national and international level.

The Porgera Joint Venture is aware of the sensitivity of the PNG environment and the fact that the country has more than 5% of the world's biodiversity and is committed to good environment stewardship at the mine. Positive outcomes are being achieved through the implementation of an Environmental Management System (EMS) that was certified to the ISO 14001 standard in December 2012, and recertified in 2015 and 2018.

The EMS helps to drive environmental performance by ensuring a systematic approach to environmental management and continual improvement in the areas such as biodiversity, conservation, climate change, mine closure, water, energy and waste disposal. Certification to ISO 14001 provides assurance the right environmental programs and controls are in place and are being applied consistently and effectively in reducing environmental impacts.

But losses still being felt as Porgera remains shut 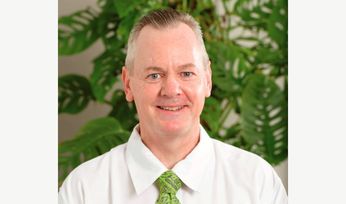 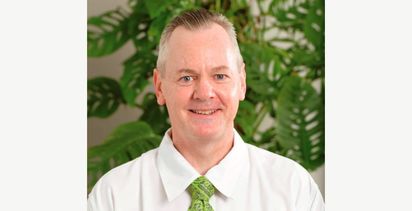