The fact that international Cat® dealer Hastings Deering has been operating in Papua New Guinea for more than 70 years is an excellent indication of the commitment and service the company has invested in the country. 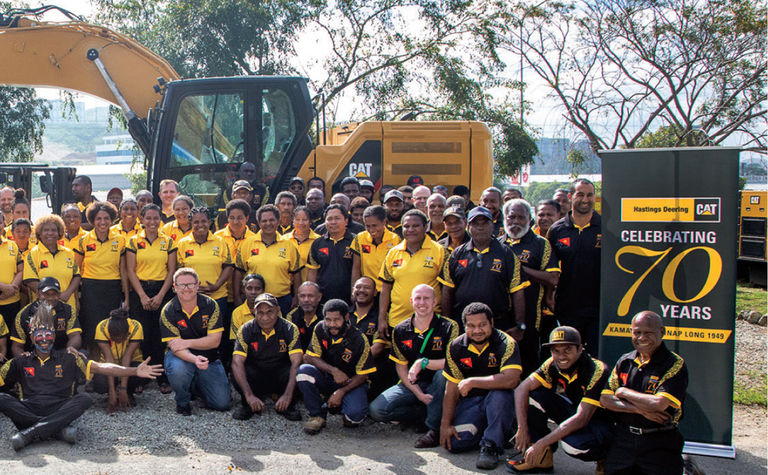 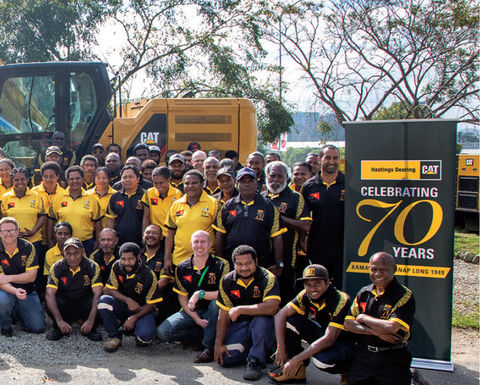 One of the top five Cat® dealers and the biggest in Australia and Papua New Guinea by revenue, the company is the exclusive distributor for the sale of Cat equipment, technology solutions, parts and services.

Backed by the motto "Your Advantage" the company has been at the forefront of the growth of PNG, both in a commercial sense, and as an integral part of the development and establishment of the mining industry.

Since 1949 Hastings Deering has been delivering Cat quality products and services to customers in PNG and now operate from six centres - Port Moresby, Lae, Tabubil, Kimbe, Kokopo and Lihir as well as a branch in Honiara, Solomon Islands.

Area Manager, Andrew Dare, pointed out that when the company opened a branch in the Morobe Province of PNG in 1947, before becoming a Cat dealer, there were only three staff on the ground.

"The operation has grown over the last 70 years where we now have 320 staff working in the region with staff on site at Lihir, one of the largest gold mines in the north-east of the country on Lihir Island in New Ireland Province, as well as a small parts store.

"The mining industry is our major customer in PNG and includes the OTML group and the Porgera Joint Venture gold mine in Enga Province and Lihir. We also service a lot of the other miners like the Wafi-Golpu joint venture in the Morobe Province and K92 Mining' Kainantu gold mine in the Eastern Highlands province."

A feature of Hastings Deering's service for PNG customers is a range of component repair options it has developed and tailored towards the needs of the mining and construction industries. The four simplified options cover new, rebuild and ‘return and repair'.

Regular condition monitoring practices enhance the ability to identify small problems prior to them developing and causing a failure that could shut down vital equipment and cause costly project delays. The new processes are designed to reduce unscheduled repairs and improve equipment availability, increase production and reduce owning and operating costs.

In some cases, condition monitoring may also be used to provide condition-based preventative maintenance, which helps to reduce life-time fluid and filter usage, further reducing costs and environmental impacts.

Dare said he was excited about the immediate future for Hastings Deering in Papua New Guinea.

"The next year or so will be about change for Hastings Deering. We want to offer our customers something different, something that will improve the customer experience in ways they will value," he said.

"With a strategy to introduce the sort of change that will empower our staff and provide more effective service to our customers we will be well positioned for the future.

"It's about improving our internal processes as well. Instead of what we would probably do on a computer today for our customers, we will look at digital solutions that free up time & enable our employees to spend more time with our customers supporting them to get the best outcomes from their Cat gear."

Dare said the mining equipment used in Papua New Guinea was much the same as Australia with Hastings Deering supplying the mining companies with a range of Cat equipment including R2900G underground loaders, AD45 articulated trucks, large shovels and 793 off-highway trucks.

He said there were quite a few new projects in the pipeline including Wafi-Golpu, which is a joint venture between Australian miner Newcrest and South African miner Harmony, and OK Tedi where the operators were looking at opportunities to expand.

"There's plenty going on," he said.

"The $US19 billion PNG LNG project is proceeding and we're hoping to get involved in that. We can bring equipment of all sizes into the country as required, we can assist our customer select the most appropriate gear and we have a service and support network second to none."

The next phase of Papua New Guinea's natural gas development led by French oil major Total is expected to be followed by the expansion of the ExxonMobil-led PNG LNG that commenced production in 2014.

PNG LNG is an integrated development designed to commercialise the gas resources of Papua New Guinea and has already produced more than 8 million tonnes of liquefied natural gas (LNG) for export to major customers in the Asia region. It will include gas production and processing facilities, onshore and offshore pipelines and liquefaction facilities.

A recently signed Gas Agreement, made between the Government of Papua New Guinea and Total, Oil Search and ExxonMobil, outlines the fiscal terms and benefits sharing arrangements of the new project and paves the way for the start of engineering and design later this year.

"We provide back hoes and graders, while our most common pieces of equipment for general use are probably excavators."

Apart from providing work opportunities for Papua New Guinean men and women, who comprise 96% of Hastings Deering's 320 workforce, the company is an active supporter of local sporting and community events.

These include: Gold sponsor with Buk bilong Pikini, which roughly translates as books for children and established in 2007 with a mission to help increase literacy rates in Papua New Guinea by setting up children's libraries in communitybased localities; a major supporter of Businesses 4 Health; a Gold sponsor of Bulolo Ambrose golf weekend in the Morobe Province; a Corporate sponsor of the rugby union body SCRUM; a sponsor of Dash for Cash at the Hunters Games; a Corporate sponsor of the National Apprentice and Trade Resting Board (NATTB); as well as the RSL, the RSPCA, Karim Bel, an organisation that provides beds for labour wards in hospitals, the Carbine Club, and more recently a two-year agreement to sponsor Cricket PNG.