With a K15 billion budget for 2014 and a forecast of 6.2% economic growth, Treasurer Don Poly affirmed PNG's economy was expected to grow strongly as the much anticipated PNG LNG project comes online.

When the first four questions chairman Jac Nasser received were on climate change, it became clear the issue would be the hot topic at the Perth meeting.

"So what you're asking us to do, in essence, we started doing 20 years ago," he told shareholders.

He went as far as saying BHP was a "dream" company to invest in against the backdrop of climate change.

"This company is well positioned for a company no one can define."

Nasser said he was frustrated by the fact that the company had the "foresight" to think about climate change so long ago but was coming under such scrutiny.

Elsewhere, the Dow Jones Industrial Average hit a milestone overnight when it closed above 16,000 for the first time ever.

The index reached more than 15,000 points for the first time in May, highlighting what has been a good year for equities.

Newcrest 'looks forward to further consultation on the details' 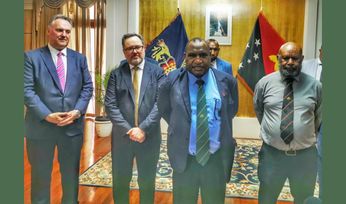