A moderate global economic recovery will be seen into 2013, although still requiring significant support from policymakers.

The company advises that investors should move from credit towards equity and real estate assets as the upturn becomes substantial.

While the global profit growth is somewhat below analyst expectations of 10-15%, SLI said the 5-10% range would still be acceptable to investors as cash flow would support dividend payments and corporate bond coupons.

"The global economy will be supported by improvements in the US and China/Asia in 2013, while the eurozone and Japan will remain a drag on activity," Milligan said.

The European Commission has forecast growth will be only 0.1% in 2013, with modest expansion in Germany offset by continued recessions in Italy and Spain, resulting in stagnation for France or the UK.

Japan is in a similarly difficult situation as the combination of higher energy bills after the nuclear shutdown, an uncompetitive exchange rate - partly due to safe haven flows - and trade disruption from China and Europe have brought about a modest recession.

SLI predicts global equities will trade mid-range in terms of valuations in 2013, sufficient to suggest 5-10% yearly returns for a long-term investor.

"Real estate is similarly attractive in many regions, where we anticipate returns of 7-8% per annum," Milligan said.

"Sovereign wealth and pension fund allocations to commercial property are expected to increase in the coming year as managers seek higher yielding assets.

"Credit is becoming somewhat less attractive, partly as valuations tighten in and partly as issuance surges with lower quality offerings."

Milligan said investors would need to monitor the risk of commodity prices in general and oil in particular, as a potential squeeze on margins.

He warned that financial markets were anticipated to remain volatile, though not as marked in 2013 as 2011-12.

Some political hurdles lie ahead for 2013, including elections in Italy where markets will look for a reform-minded government to overcome the continuing recession and elections in Germany.

SLI also predicts Spain will need to call on support from the European Central Bank's outright monetary transactions program as the downturn in the economy will eventually cause investors to worry about debt issuance.

Stronger Simberi up for sale 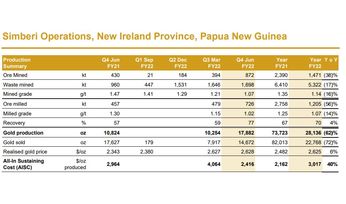 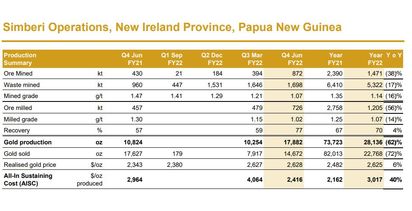