When Moti flew from India and Singapore to Port Moresby en route to Honiara, the Australian Government began police proceedings to force his extradition.

Instead, Moti was whisked away overnight in a PNG Defence Force aircraft in a move that greatly angered the Australian Government, which warned that governance issues could endanger Australia’s $A300 million annual bilateral aid program.

A number of inquiries were set up by the PNG Government but despite the months that have passed by, the truth about who ordered the escape flight remains something of a mystery.

Prime Minister Sir Michael Somare has categorically denied on a number of occasions that he had given the order for Moti’s escape but the latest Defence Ministry inquiry and its apparent inability to pinpoint the source of this order, continues to put a focus on Somare himself.

Things have gone awry with a decision by Somare to shut down the inquiry and to question its legal basis.

He has also sacked Defence Minister Martin Aini because Aini had disclosed that he was virtually stood over and forced to sign an instrument to disband the inquiry, though this has not been served as yet on the three-member inquiry.

Public opinion has swung against Somare and his ruling National Alliance Party and could well adversely affect its performance in the national elections in June.

This development is very unfortunate because the National Alliance-led Government has increasingly been recognised as arguably the most successful government since independence in 1975.

Most observers believe the likely beneficiary will be the Pangu Pati, the party that Somare originally led when the country gained independence.

In such a scenario, Sir Rabbie Namaliu would become prime minister for the second time, having previously served from July 1988 until the national elections in 1992.

Namaliu was appointed treasurer after Bart Philemon was sacked from the position, making it very clear at the time he was not very happy to take the job because of the wide perception that Philemon had done an excellent job as treasurer. Until this move he had served as foreign minister.

Since becoming treasurer, Namaliu has been in the spotlight and was responsible for delivery of the 2007 budget last November.

Historically, the ruling party has always been heavily defeated in the national elections but the forthcoming election will be somewhat unique because of the big advances made by the present government as well as the introduction of limited preferential voting.

The latter should, strictly speaking, be a positive for member parties of the ruling coalition because of their high public profiles.

The National Alliance has been undertaking extensive planning for the forthcoming elections and will certainly run a well-funded campaign.

At this stage, many observers believe that public concern and anger over the Moti affair is likely to cause a body blow to the chances of Somare’s National Alliance, which has publicly stated its ambition to win 50% plus one seat in the coming national election. 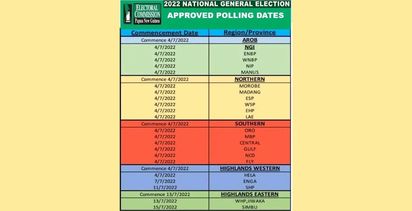