FEATURE: PNGIndustryNews.net was in Port Moresby as the banned West Papuan Morning Star flag was flown on a PNG government building for the first time in history. By Alison Bevege

The Indonesian Government has been accused of interfering with political freedom inside Papua New Guinea after West Papuan independence activists were targeted in the lead-up to the historic first raising of the banned Morning Star flag.

In a bold move, Port Moresby Governor Powes Parkop organised for the West Papuan flag to be flown atop City Hall on the December 1 anniversary of the independence movement.

The Morning Star flag, which has been banned in neighbouring Indonesia since it annexed the western half of the island in 1969, had never been officially raised over a PNG government building before.

Jakarta is so sensitive about the issue that in 2004, independence activist Filep Karma got a 15-year treason sentence for helping to lift the colours over West Papua.

The Nobel Peace Prize nominee is still in prison.

For a generation, only a dwindling handful of PNG opposition politicians have dared to question Indonesia's occupation of the west.

But in an act of defiance, Parkop not only organised the raising of the flag, he personally invited exiled West Papuan independence leader and Nobel Peace Prize nominee Benny Wenda to the ceremony.

Parkop's invitation may have been seen as controversial by Indonesia but as an elected parliamentarian in an independent nation he was free to do so.

The extraordinary public tussle that erupted over the flag-raising between PNG Prime Minister Peter O'Neill and Parkop exposed the tense undercurrents between Indonesia, Papua New Guinea and Australia.

O'Neill asked that the flag raising be cancelled but Parkop refused, stating: "Clearly Indonesia has put pressure on the government".

On the morning of December 1 crowds began to gather at a sports oval in preparation for the planned march to City Hall. Police told them marching was banned.

About 1000 people then had to hitch rides on the back of utes or pile into mini buses to drive to the ceremony instead.

Speaking at the event Parkop spoke out strongly against what he said was Indonesian interference in the domestic freedoms of PNG.

"Indonesia tried to extend its ugly regime … into our country," he said.

"But this is the independent state of PNG and we have rights and freedom. I will raise this flag myself."

Parkop accused Indonesia of genocide and a reign of terror within West Papua, as well as accusations of intimidating dissenters within PNG.

He also criticised the 1969 Act of Free Choice that allowed Indonesia to annex West Papua as illegitimate.

"I want to tell the Indonesians that their claim to West Papua being part of their territory … is based on fraud and lies," Parkop added.

When the UN agreed to let Indonesia govern West Papua in 1963 it had been on the condition that a plebiscite be held to determine whether the people wanted to be ruled by Jakarta.

Instead of a universal secret ballot, Indonesia selected 1024 West Papuan representatives to vote in a show of hands over the future of the disputed territory.

"1000 people under the barrel of a gun is signing that they should become part of Indonesia: complete fake, complete fraud," Parkop said.

After speeches the flag was raised to the sounds of joyous drumming and dancing.

Patrick Kaiku - were then randomly arrested.

Rumours ran through the crowd that Indonesia had paid the police and that they had to be seen to be doing something.

Parkop escorted the trio to the police van, telling the crowd that any charges would be fought through the courts.

They were later charged with unlawful assembly and released on bail - a form of harassment considered common in Indonesia but unprecedented in PNG.

On her arrival in the capital, the international human rights lawyer presented Parkop with the John Rumbiak Human Rights Defender award and gave a legal briefing at a meeting in Parliament.

But unexpectedly, on the day before the flag raising Robinson found herself being threatened with arrest and deportation.

In an extraordinary move, immigration officials raided the hotel where Robinson was staying and served a notice threatening both her and Wenda with prosecution.

"According to reports, you are engaging in political activities on a visitor's entry visa," the letter read.

"You are hereby directed to refrain from engaging in any such activities with immediate effect.

"Failure to comply with this directive will leave us no option but to have you arrested, prosecuted and removed from the country."

"I'm not the organiser of the events. I'm here on the specific invite of the governor of Port Moresby," she said.

"I don't believe that Australia would maintain the policy position that it does if more Australians had seen what I had seen in West Papua," she said.

"That's why Indonesia is so keen to control the information that goes out."

O'Neill denied that Indonesia had put pressure on him to interfere.

"No one makes decisions or influences the government of Papua New Guinea," he said.

"We are in control of our own laws and regulations and these cannot be changed by anyone."

The Australian government has been anxious to secure cooperation on people smuggling and to repair the damage of the spy scandal.

In October, Australian Prime Minister Tony Abbott told Indonesia that Australia would not tolerate West Papuan independence activists, saying they were not welcome.

"Australia will not give people a platform to grandstand against Indonesia," he said.

They are not idle words.

Seven West Papuans fled to the Torres Strait island of Boigu in September after taking part in the Freedom Flotilla ceremonial protest.

They were dumped in Port Moresby within 48 hours of asking for asylum in Australia.

Australian Immigration Minister Scott Morrison has never explained why the seven activists, running from Indonesia, were treated differently to the other asylum seekers who simply transit Indonesia seeking a better life in Australia.

The PNG government sent the Boigu Seven to the East Awin Iowara refugee camp on the border of Indonesian Papua.

After three days the authorities brought Indonesians to take photographs of the Boigu Seven.

The Indonesians had claimed they were from the PNG LNG project but locals recognised them from the Indonesian consul's office in the northern border town of Vanimo.

At least one of Boigu Seven has since been threatened with deportation back to the country he fled from: Indonesia.

Other refugees have reported seeing the Indonesian military crossing the border into PNG.

"There are many Indonesians here, many," refugee and activist Fanny Kogoya said. The 20-year-old fled from Wamena in the highlands near the Baliem River, walking for days through the jungle to escape.

Despite recent promises that they can now apply for PNG citizenship without fees, many refugees fear increasing cooperation between PNG and Jakarta.

Australia may also be putting on pressure to silence them on behalf of Indonesia.

One of the most worrying developments for the Papuans is an extradition treaty signed by PNG and Indonesia in June.

It was signed less than a month before former Australian prime minister Kevin Rudd announced the Manus Island detention centre that saw more than $400 million directed to the PNG government through AusAID.

The treaty contains a nominal provision protecting political activists - but that protection appears to be overridden by any alleged terrorism related offences.

Indonesia has accused political enemies of terrorism before, such as Wenda.

The terrorist provisions in the treaty will make political opponents of Indonesia's rule who are sheltering in PNG vulnerable to being handed over to the Indonesian forces they have fled from.

Back in West Papua the noose is tightening on the resistance.

Since 1969 about a million Indonesian migrants were moved to West Papua under a government transmigration program.

They now nearly outnumber the native Melanesians who make up about 52% of the population.

Indonesia made West Papua a "special autonomy" region in 2001 and has divided it into two provinces, which they named West Papua and Papua, creating more levels of bureaucracy.

The last of the independence fighters, the OPM, live in hiding in remote jungles and caves.

They have very little money and hardly any guns other than those they capture from the Indonesians or manage to buy from Raskol gangs.

They fight with bows and arrows, sticks and rocks. Sometimes they find World War II relics and use those.

Their last hiding places may soon be lost.

A plan is afoot to use the Indonesian military to rapidly build roads into the most remote jungles, splitting them open.

Amnesty International has confirmed it is still unable to enter the Indonesian half of the island despite headlines in October claiming the reverse.

A COLLECTION of artefacts collected during the Australian military occupation of Papua New Guinea between... 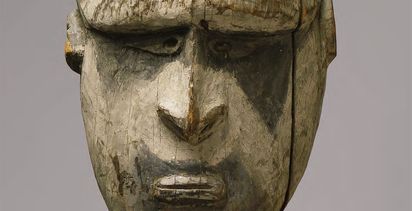