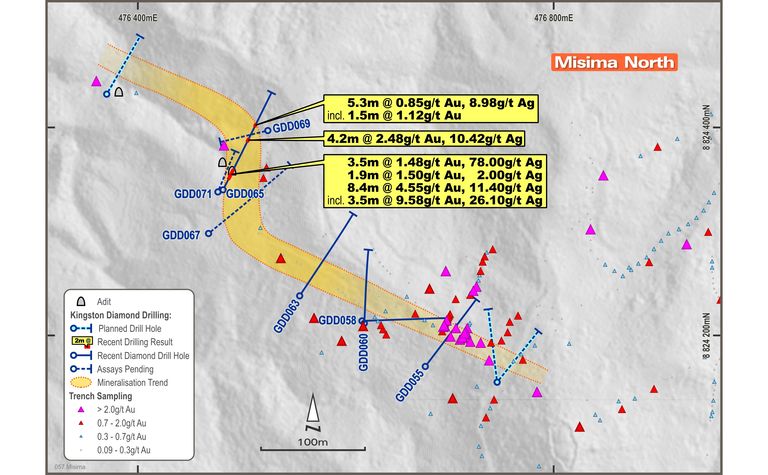 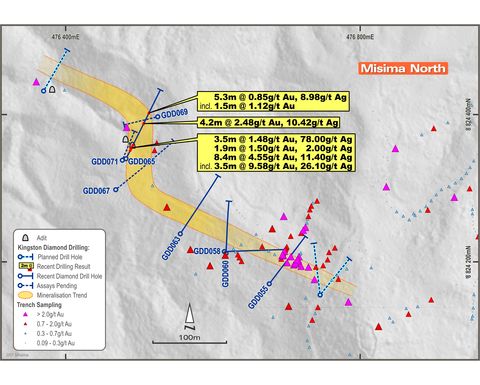 Some of these included 3.5m at 1.48 grams per tonne gold and 78.0gpt silver from 16.2m including 1m at 2.18gpt gold and 201gpt silver; and 8.4m at 4.55gpt gold and 11.4gpt silver from 23.8m including 3.5m at 9.58gpt gold and 26.1gpt silver.
The company says some core loss occurred within the mineralised section between 16.2m and 32.2m of GDD065. "Kingston believes this 16m section may represent a continuously mineralised zone."
Assays are awaited from a follow-up hole (GDD071) designed to confirm the true width and continuity of "this shallow, strongly mineralised zone.  Results highlight the strong potential to discover additional shallow, high-grade mineralisation at Misima North, supporting Kingston's strategy of targeting shallow starter pit opportunities at Misima".
Kingston adds that this early drilling success highlights the prospectivity of the largely untested 4km strike extension to the north of the historical Umuna Pit.
Managing director Andrew Corbett said he was delighted to see such encouraging results from one of the first Misima North holes.
"These assays confirm the presence of high-grade gold mineralisation 2.5km north of the existing Umuna Resource boundary, and highlighting the prospectivity of the broader Umuna Fault Corridor which hosts both the Umuna and Misima North target areas. The entire 4km strike length of the Umuna Fault Corridor remains largely untested, providing a large, high-quality exploration target for the Company to progressively drill.
"Importantly, Misima North represents the second new area discovered by Kingston in recent months, coming after the previously reported discovery at Abi, part of the Quartz Mountain region. Such successes are a strong credit to the excellent work being done by our geological team in pursuit of our strategy to identify near-surface mineralisation to provide early mill feed for the Misima mine plan.
"We currently have two rigs drilling at Ewatinona in the Quartz Mountain area as we look to upgrade and potentially expand the existing Resource in this area, with drilling also planned to follow-up on the initial positive results at Abi. Once those campaigns are complete, we then expect to return to Misima North for a second round of drilling," Corbett said. 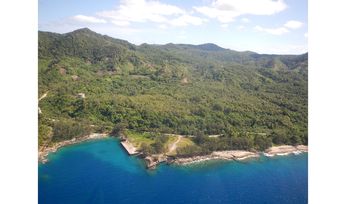 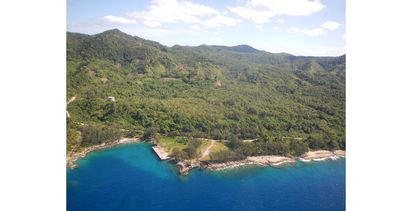