Glory days far from over for Barrick mine

GOLD production from PNG's renowned Porgera mine last year plunged to an all-time low of 542,000 ounces but could recover this year if problems with the collapsed west wall are soon fixed. By Brian Gomez

A new assessment by the Australian arm of the North American mining consultancy Behre Dolbear suggests the magical 1 million ounces the mine has cracked on a number of occasions may again be within its grasp early next decade.

About five years ago the previous owner of Porgera, Placer Niugini, had been canvassing the likely end to mining by around 2012.

It had even completed a detailed mine closure plan.

However, gold prices strengthened considerably and the new owner, Barrick Gold, is forging ahead with plans for operations to continue at least to the end of the next decade.

To get there it will have to implement the Stage 6 cutback, which will expose more of the potential ore body to open cut mining.

The Behre Dolbear (BDA) report, which was completed for Emperor Mines' parent DRDGold because of its decision to sell a 20% stake in Porgera back to Barrick, says the Stage 6 cutback will allow open cut mining to continue until 2016.

And for the first time this report mentions the possibility there could be a Stage 7 cutback. The mind boggles to think how big the eventual open pit might be.

The report does not state how much more life this will give the mine but the huge cost of a massive cutback - it will certainly be predicated on high gold prices - would suggest that it could extend well beyond the 2020s.

Last year 1.3Moz were added to reserves, more than double the amount produced, and reserves now total 9.4Moz in addition to 3.6Moz of indicated and inferred resources.

Underground mining of high-grade quartz and metal sulphide veins is keeping operations profitable while low-grade stockpiles are processed during rehabilitation of the west wall.

Underground mining took place between 1990 and 1997 and recommenced in 2002 with stoping from three zones that contain 8.1 million tonnes at 8.7 grams per tonne gold.

BDA says it believes the underground operation of around 260,000t this year is significantly below potential capacity.

Barrick is planning for underground mining to peak at around 1.3Mtpa between 2013-15 based, of course, on the extent of known reserves.

On current projections gold production should climb steadily to a peak of 930,000oz in 2012 although, in all likelihood, this figure will top the million-ounce level.

One reason for this optimism is that historical data suggest open cut reserves are likely to have been underestimated by at least 10% and the likelihood of higher underground production.

They rise again on the current assumption that production will taper off until another big hike from 702,000oz to 879,000oz between 2014 and 2015, assuming open cut mining does not benefit from a Stage 7 expansion.

No hiring of anyone causing disruption at the mine 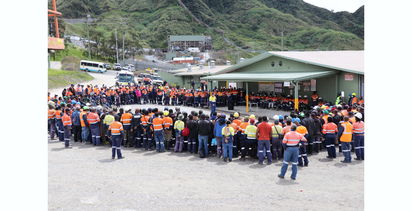