A RED-HOT electric vehicle market has triggered a face-off between big oil and utilities. 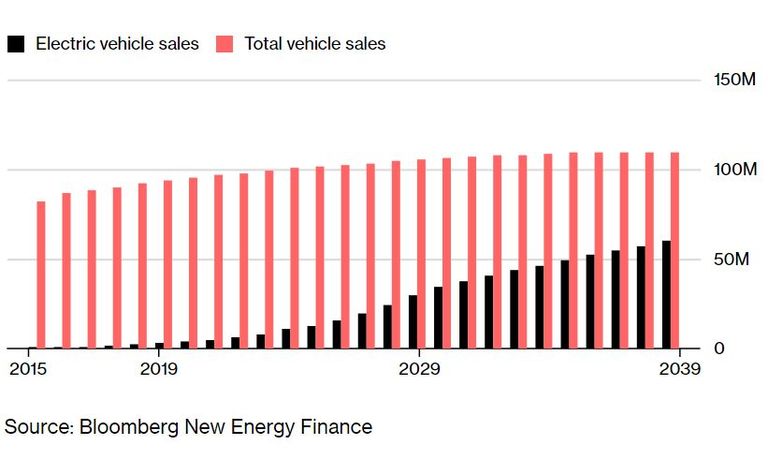 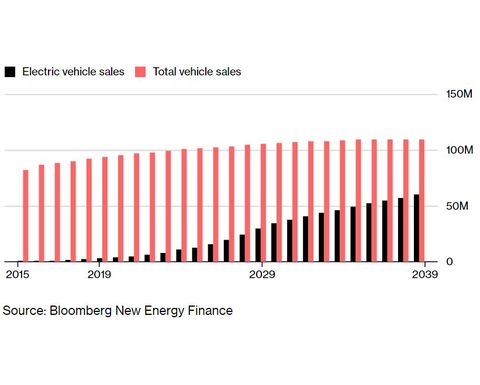 This is the subject of an in-depth look at the changing dynamic of petrol-diesel engines in the face of the rise of the electric vehicle market by news agency Bloomberg, reported by Kelly Gilblom and Anna Hirtenstein
Oil majors, which have sold fossil fuels to cars for a century, are now moving into an electricity sector that is preparing for exponential growth. The problem is that utilities, the primary power suppliers for a century, have the same idea.
BP predicts electric vehicle sales will surge by an eye-watering 8800 percent between 2017 and 2040, making it an attractive business for oil companies as demand for petrol and diesel are forecast to slow. Big oil will have to battle the traditional utilities for charging at people's homes, on the road and even offices of green-car owners.
"It's the banging together of industries in a way that's never happened before," said Erik Fairbairn, the founder and CEO of Pod Point, one of the UK's largest electric-vehicle charging companies.
Power providers are, for the first time, meaningfully interacting with car companies and the oil industry "is realising if they get this wrong then the requirement for them in the future is significantly diminished", he said.
The logic for oil companies is clear. Petrol and diesel sales have been a backbone of their business since the internal combustion engine went commercial at the turn of the last century. But with drivers now becoming more conscious about emissions and the environment, most analysts forecast growth in demand of these fuels to slow and eventually drop.
Vehicle charging points are a way to bring drivers to oil companies' retail forecourts, keep the cash registers ringing and also bring in revenue from the sale of coffee and snacks. Tufan Erginbilgic, chief executive officer of BP's downstream business, estimates about half of the gross margin at its retail sites comes from non-fuel sales.
BP said last week it would spend about $170 million to buy electric-vehicle charging company, Chargemaster, with plans to add the technology to its existing network of retail stations. It follows similar moves by Shell, the world's second-biggest oil company by market value.
The deal "makes sense," Oswald Clint, an analyst at Sanford Bernstein wrote in a report. "BP wants to remain a fuel retailer of choice, therefore they need an EV offering as those vehicle types rise in number."
However, Pod Point's Fairbairn estimates only 3% of car charging will occur while drivers are in transit, with the overwhelming majority plugging them in overnight at home or wherever they leave their vehicles sitting idle. This directly plays into the hands of existing utilities.
For power companies, EV charging is less of a hedge against losing customers and more of an opportunity to capitalize on what will likely be a big surge in electricity demand. Sweden's Vattenfall AB and Finland's Fortum Oyj are currently installing chargers at homes and outside offices.
"What we see is that most charging takes place when the car is parked for four hours or more," said Tomas Bjornsson, vice president of e-mobility at Vattenfall. "Essentially at home, at work or at a destination like if you're going to a shopping mall, football game or whatever it could be. So this is really where we want to make sure that EV drivers get access."
Both utilities are also vying to provide drivers with charging infrastructure along highways such as at fuel stations, and rivaling the oil majors' plans.
"We are covering much of the value chain," said Rami Syvari, head of international sales and business development at Fortum Charge and Drive, a division focused on electric vehicles. "Not all customers are able to charge at home or at the office; it is an overall package."
Big oil and utilities could, of course, coexist with fuel retailers dominating on-the-road charging and utilities taking on homes and offices. But the oil majors' ambitions are likely to be bigger.
Shell estimates 40% of vehicle charging will occur at home and another 40% at work. So last year it bought First Utility, the seventh largest power-provider in the UK, taking what is perhaps the most direct shot at existing electricity suppliers' market share.
The deal "should come as no surprise," Mark Gainsborough, executive vice president of New Energies at Shell wrote in a LinkedIn post in December.
In October, Shell said it was buying NewMotion, Europe's largest electric-vehicle charging provider. In late November, it reached an agreement with IONITY -- a Munich-based venture between BMW Group, Daimler AG, Ford and Volkswagen - to start charging stations in 10 European nations.
As the battle for market share heats up, Aleksandra O'Donovan, an advanced transportation analyst at Bloomberg New Energy Finance, believes both Big Oil and the utilities will have a part to play, and demographics and geography will determine each sector's success.
"It won't be one solution fits all," O'Donovan said. "The split will vary from country to country depending on how people live. It will be a different story in Norway versus Tokyo."
The report, with graphics, appears here: https://www.bloomberg.com/news/articles/2018-07-02/big-oil-utilities-are-lining-up-for-an-electric-vehicle-war 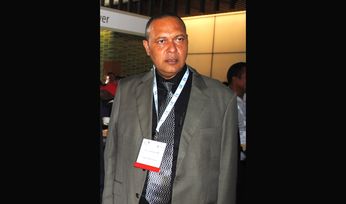 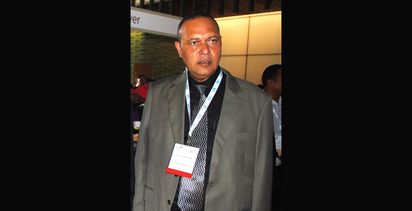