A spot of optimism for the weekend

INVESTORS could finish the week with a hint of a smile on their faces on the back of positive economic news emerging from the US overnight.

In a sign the labour market was continuing to improve, claims for jobless benefits fell last week while manufacturing numbers in the New York region grew at their fastest rate since June 2010.

Adding to the positive mood, the general economic index from the Federal Reserve Bank of Philadelphia increased to an 11-month high of 12.5 in March from 10.2 last month, growth which outstripped analysts' expectations.

Kina Petroleum was the standout performer on the PNGIndustryNews.net watchlist this week, gaining 20.75% on the Australian Securities Exchange as the market revalued its 15% stake in PRL 21 on the back of Mitsubishi farming into Talisman's interest for an implied value of $US2.95 million ($A2.8 million) per percentage share.

However, Nuiminco Gold didn't have such a good time of it, wiping off 18.75% of its value on the ASX and finishing at A6.5c while New Guinea Gold shed over 16% on the Toronto Stock Exchange.

However, the news was better on the futures front with gold futures gaining last night, for the first time this week, on signs of bargain hunting from investors after the price of the precious metal fell sharply during the week.

Gold on the Comex division of the Mercantile Exchange in New York gained almost 1% overnight to close at $US1659.90 an ounce.

Across the Atlantic, copper for three-month delivery climbed 1.2% to $8565 per tonne on the London Metal Exchange.

Tapis crude finished slightly up for the week at $134.49 per barrel.

Throughput up in Q2 for Kainantu

'Optimism over resilience in the pandemic' 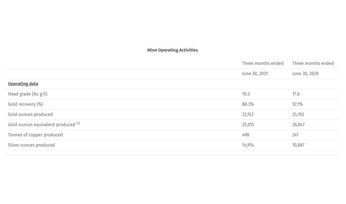 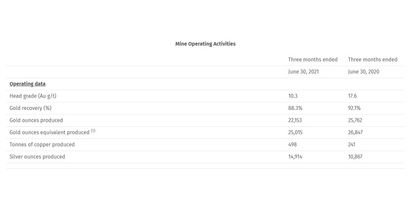