ENK has boosted resources at its flagship Acoje nickel laterite project in the Philippines, as the bankable feasibility study for the project nears completion. The company said nearly all of the inferred material from the 2008 estimate had been converted to indicated, while a further 20Mt had been delineated.

The new estimate used data from 117 diamond drillholes completed since the last estimate.

A BFS for Acoje will be completed midyear, based on an atmospheric tank leaching operation that could be developed in stages.

Pilot testwork indicated cash costs of $US4.33 per pound of payable nickel.

A 23.5Mt resource was announced for the project in 2007, based solely on test pit data.

The company will release an updated resource in the June quarter.

ENK shares closed half a cent higher to A17.5c.

SHARES in ENK have soared by up to 45% on news that it will sell its Caldag nickel project in Turkey... 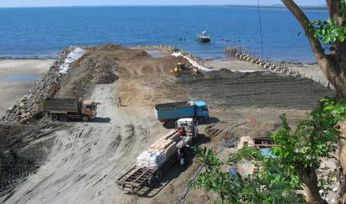 Acoje nickel to be developed in Q3