SANTOS has decided to roll the dice on the Muruk-1 well in Papua New Guinea’s highlands, joining ExxonMobil and Oil Search in the two-week-old well. 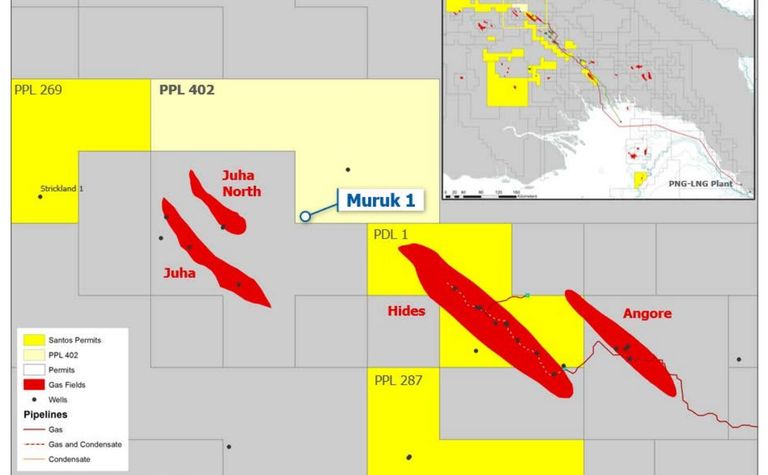 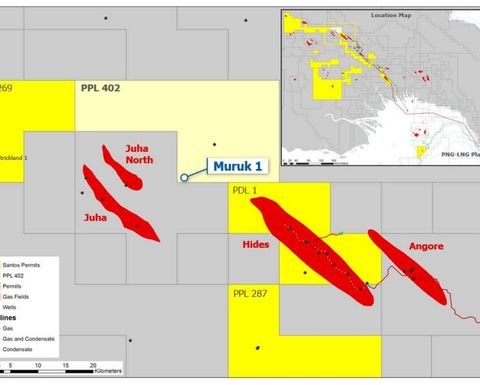 While the terms of the farm-in are confidential, Santos has taken a 20% interest in the 510sq.km PPL 402 from both its new partners.

PPL 402 is just 40 kilometres from the Hides field and its associated oil and gas production facilities.

Muruk sits within the highly prospective thrust and fold belt trend. The well is targeting the same Toro Formation that is gas bearing in the nearby Hides and Juha fields and being assessed at Strickland-1/ST4 to the west.

Muruk has an estimated potential resource of around two trillion cubic feet within the Cretaceous-aged sands, which is of a sufficient size to support half of a LNG train.

RBC Capital Markets said in a note this morning that it sees upside in Muruk of up to 3Tcf, and gives the well a 20-25% chance of success.

“We think this is a positive move from a Santos perspective. Santos's only current equity gas in the PNG LNG JV and probable candidates for expansion trails (Elk/Antelope and P'nyang) is its interest in the Hides field,” analyst Ben Wilson said.

“We have previously indicated that Santos is increasingly unlikely to enter the P'nyang JV (PRL3), with the likelihood of Elk/Antelope being the immediate best option for PNG LNG expansion gas, notwithstanding the hold-up regarding Exxon's bid for InterOil.

“We think it is important for Santos to try to maintain a seat at the table with respect to PNG LNG expansions and success at Muruk-1 could provide the company greater leverage to low-cost expansions.”

Wilson added that the farm-in was indicative that Santos had not shut up shop with respect to growth but rather is targeting its limited resources on its core portfolio.

Farming in has resulted in only the second well outside Australia that Santos has participated in this year.

Managing director Kevin Gallagher said Santos had a long and successful working relationship with both Oil Search and ExxonMobil, and was looking to grow Santos’ position in PNG.

Muruk-1 will be followed by the P'nyang South-2 appraisal well.

Santos joins the club at P'nyang